JSON is become a very widespread format for the Web Services but in some cases, you would have to parse data in the good old XML format. In that tutorial, you are going to learn how to parse a XML file on Android. 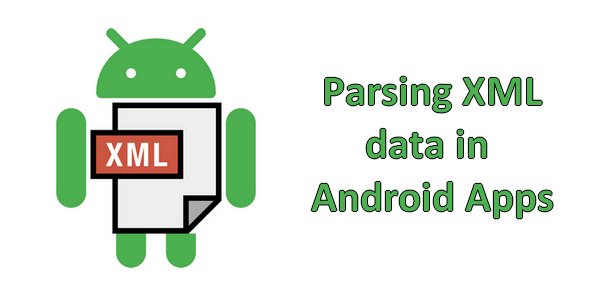 Note that there are various XML parses available in the Android SDK in standard. Thus, you can use the following solutions :

As usual, each parser has its advantages and drawbacks.

The recommendation on Android is to use the XMLPullParser API which consumes less memory than the DOM Parser API which loads the complete XML file in memory before parsing it.

So, in this tutorial, we will use the XMLPullParser API. Note that you can also discover this tutorial in video on YouTube :

To display the parsed XML data, we need to create a simple User Interface. It will consist in a simple TextView centered on the screen :

Then, we define some XML data to parse inside a file under the assets directory of our Android project. This file will be named data.xml and will contain some NBA players with data like name, age and position played :

To map the data for each player, we create a Player POJO (Plain Old Java Object) :

We got an InputStream on the XML file by calling the open method of the AssetManager instance. With that instance, we can set the input on the XMLPullParser instance. It gives us the following code :

Now, we need to parse the XML data. The parsing will be processed in the processParsing method. We start by getting the current event type from the parser by calling the getEventType method.

Then, we enter in a loop while the event type is different of the XmlPullParser.END_DOCUMENT constant. In the loop, when we meet a XmlPullParser.START_TAG event type, we get the name of the current tag by calling the getName method.

When we have a player tag, we create a new Player instance and we add it in an ArrayList of Player. This list will be used to store all the players read from the XML file.

It gives us the following code :

The last step is also the simplest. We need to display the players in our TextView via the printPlayers called at the end of the processParsing method.

It gives us the following complete code for the MainActivity :

Our App in Action

Best part of the tutorial is coming since it’s time to put our App in Action. When, you will launch the Application, you should have the following result : 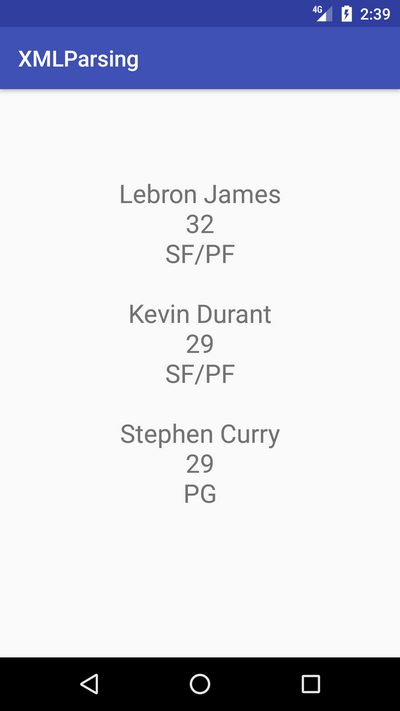 That’s all for that tutorial.

To discover more tutorials on Android development, don’t hesitate to subscribe to the SSaurel’s Channel on YouTube :